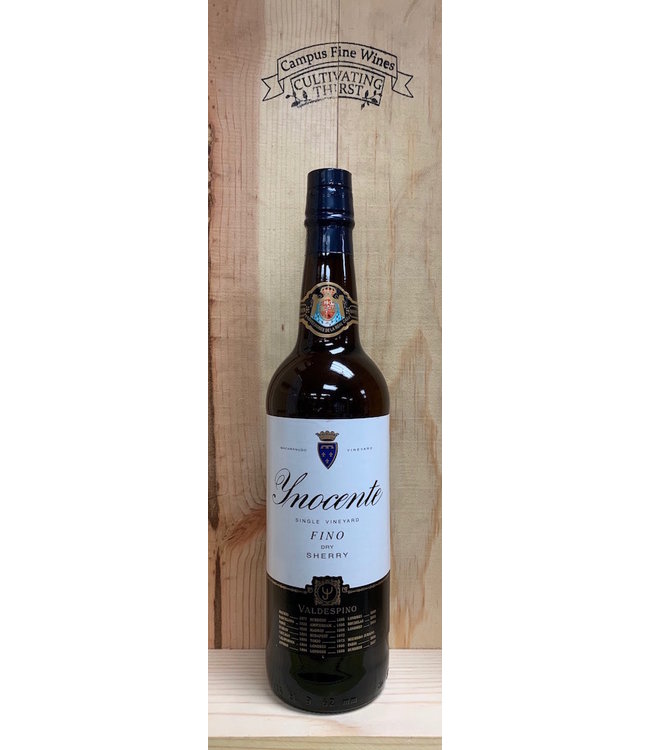 Valdespino is arguably the most famous sherry producer in the world, and is the only sherry house to make a series of wines from a single vineyard, Macharnudo Alto, considered one of the “grand crus” of Jerez because it is located at the highest altitude and on pure bright white chalk soils called Albariza. It is the sherry house’s oldest plot, given to Don Valdespino in 1264. The single-vineyard Macharnudo wines are also part of the Grandes Pagos de España, a prestigious group of special vineyard sites throughout Spain; Valdespino is the only sherry house with this status.

The Macharnudo vineyard produces Jerez’s most majestic Fino. While other Finos are fermented in tank, Inocente is fermented in barrel with indigenous yeast. It then passes through its solera’s ten stages or criaderas (as opposed to the 2-3 criaderas employed for most other finos). The wine at bottling has an average age around 10 years—doubling or tripling the aging of most other Finos.

Throughout the extended aging, a cap of yeast (“flor”) both protects the nascent Inocente from oxygen, and it slowly sharpens and refines the wine. It is the archetype for traditional Fino sherry; in other words, it’s a wine as unmarked by oxidation as it is marked by flor. And it defies conventional wisdom in its ability to age for decades in bottle, developing further nuances.