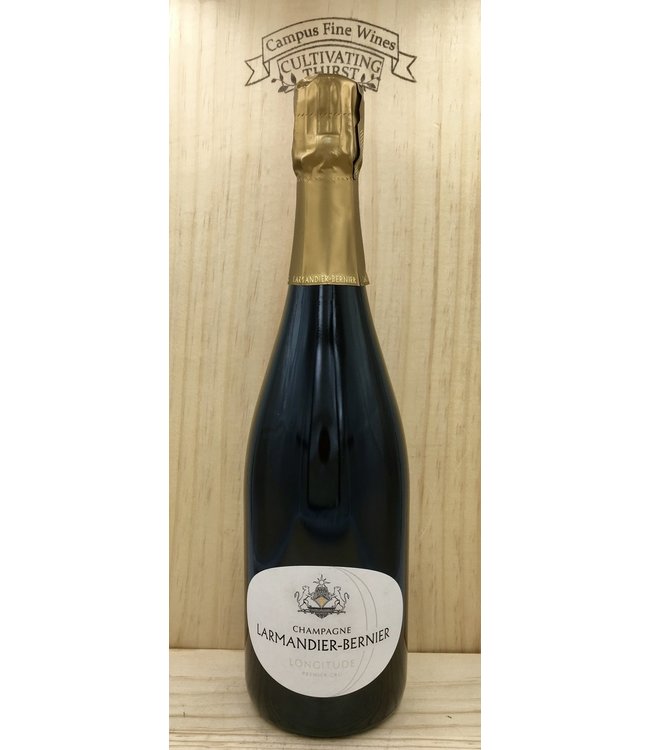 100% Chardonnay. Longitude is 60% base wine from the 2009 vintage fermented in stainless steel & 40% reserve wine from foudre & neutral oak. Aging on the lees for over two years. 4gr/l dosage. Biodynamic. Read more..

Vineyards are located in Vertus, Oger, Avize, Cramant, which form a line close to the 4th meridian.

Larmandier-Bernier is a small grower estate with fifteen biodynamically farmed hectares in Grand Cru & Premier Cru villages of the Côte des Blancs. Both the Larmandier and Bernier families have had a long history in the Champagne region, dating back to the French Revolution, but it was not until the marriage of Philippe Larmandier and Elisabeth Bernier in 1971 that Champagne Larmandier-Bernier was officially established. The small house today is directed by Pierre and Sophie Larmandier, who took over the direction of the family estate in 1988. In 1992, Pierre began to convert the vineyards over to organic and then to full-blown biodynamic viticulture in 1999.

Ever the purists, Larmandier-Bernier utilize only indigenous yeast, separate vinification for each cru, and little to no dosage for an unadulterated expression of terroir in their wines. The wines are vinified in a variety of stainless steel tanks; large, old, wood foudres; enamel-lined tanks; or smaller Burgundian barrels, depending on each cru and each vintage. Blending is generally done in the spring following harvest, and it is at this time that the Larmandiers decide whether or not their single-vineyard bottlings will be produced.

The Côte des Blancs lies south of Epernay and is the source for many top cuvees and vintage Champagnes for houses of all sizes. The vineyards are mostly situated on east facing slopes and 95% of the vines are the Chardonnay varietal (hence, the Côte des Blancs name). The soils in the area are typically a thin layer of top soil, beneath which lies the chalk that gives these wines their unique expression of minerality and terroir. Wines from this region are generally praised for their delicacy, freshness, and elegance. The estate vineyards of Larmandier-Bernier are located in the villages of Cramant, Chouilly, Oger, and Avize (all Grand Crus) as well as Vertus (Premier Cru). Most of the vineyards are planted to Chardonnay, with about 15% Pinot Noir. The average age of the vines is 33 years, with the oldest vines (50-70 years) found in Cramant.