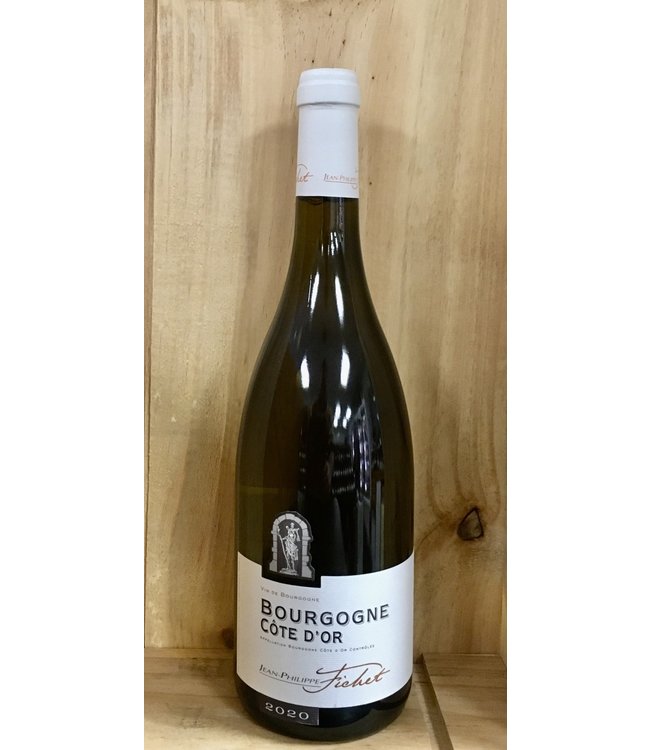 From Meursault vines planted in high clay content soil. Very racy and fresh, laced with yellow fruit and white flowers. It’s graceful, balanced and dry, with a long, lovely finish. Has aging potential, but can be fully enjoyed in its zingy youth. Read more..

Jean Philippe Fichet began as a grower in Merseault in 1981, but he didn’t own his vineyards. He lost his contracts in the early 90s and was forced to begin again from scratch. Fichet's current work is a direct consequence of René Lafon's decision to bottle his Meursault "Clos de la Barre" on its own. For more than a century prior, only the most famous vineyards-the premier crus-were ever bottled individually; everything else was blended into Meursault villages. Lafon's trailblazing not only proved that a lieu-dit (a non-classified vineyard) could make profound wine, it also drew attention to Meursault's incredible soils, which paved the way for the later accomplishments of Jean-Françoise Coche, Jean-Marc Roulot, and René Lafon's son Dominique.

Fichet carried Lafon's revolution to another level and has become a bit of a terroir obsessive, studying “every square inch of earth and stone in his domaine, to make Meursault's purest set of single-climat wines,” according to the importer. Now he’s often on his tractor from dusk ’til dawn tending his series of lieu-dits . He believes wine should reflect its terroir, so most of his productions are from single vineyards. To keep his yields low he practices severe winter pruning, rather than green harvesting. He is patient and gentle with his wines; élevage lasts 18 months, and he employs little new oak or aggressive lees stirring.

Note on recent happenings at the winery from Allen Meadows’ Burghound (subscription required): When I saw the ever-modest Jean-Philippe Fichet, who runs this 7.5ha domaine, in February 2022, he was in the middle of overseeing the reconstruction of his cuverie. Only in this case, the reconstruction was not planned. It was due to a fire that broke out in the wee hours of May 20th, 2021, due to a faulty temperature regulator. He recounted that “our domaine is located directly next to the main road D974 and thankfully there was a boulanger (baker) on his way to work early that morning who noticed the billowing smoke. He called for emergency aid and three squadrons totaling 48 pompiers (firemen) responded immediately. There were 3 pump trucks that poured the equivalent of 200,000 liters per minute on the fire that, according to a drone they had launched to measure the heat, hit 1000°C! This meant that 80% of the water evaporated before it ever hit the fire, so it took a long time to finally put it out. In the end, we were fortunate in that we had fire doors that prevented the fire from progressing so rapidly that it burned the barrels with the 2020 harvest in them. But I still obviously had concerns about either heat or smoke damage, and I spent almost €50000 in analyses for each and every barrel to make sure that the wine inside was clean and undamaged. Remarkably enough, we lost almost nothing in terms of wine though the cuverie itself was almost a complete loss.” Fichet, whom I have known even before I began Burghound, was philosophical about the loss, saying that “yes, there are days when I am quite sad about having to start over basically from scratch at my advancing age. We had insurance but it didn’t cover everything, and our financial cushion isn’t what it was. But when I feel that way, I remind myself that thankfully, no one was hurt and amazingly we saved the harvest. So, we’ll build back better and hopefully, things will work out.” We at Burghound hope so too. I would add that in tasting through the Fichet 2020s, I detected no smoke taint or wines that seemed unduly advanced, indeed a number of them were first-rate, in particular his range of Bourgogne and Meursault villages.