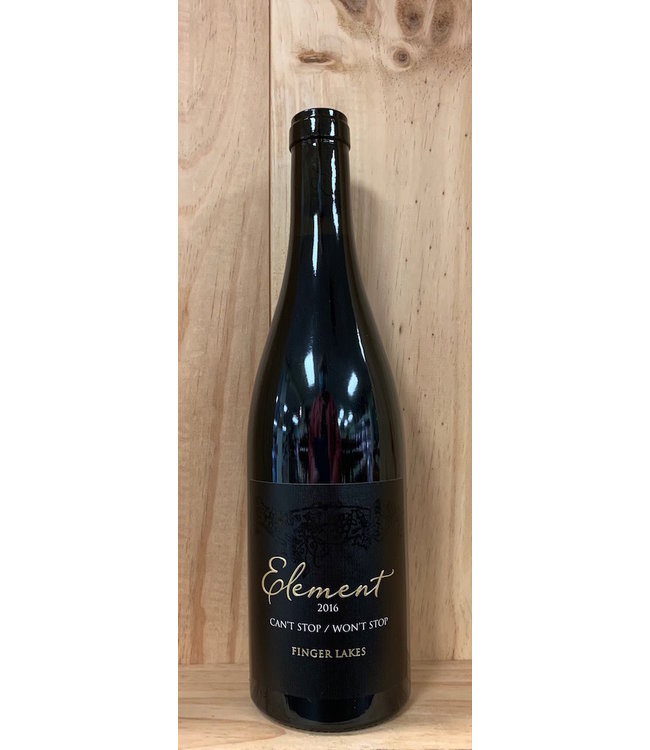 Can’t Stop / Won’t Stop is a blend of Cabernet Franc, Pinot Noir, Syrah, Gamay, Merlot, and a touch of Blaufränkisch. It’s vinified in neutral barrique and then aged for 18 months in neutral 318L puncheon. This wine can be enjoyed in its youth when the fruit flavors are bright and forward, or now, as it ages, and the tertiary, earthy aromas are coming to the fore, mingling with chocolate and baking spices. The tannins are pleasant and refined, and the acidity is still vibrant; as the bottle opens up, so do the savory/umami notes which wind around wild strawberry and ripe raspberry, and the tangy/twangy (perhaps VA) nose calms down a bit in the process. As it continues to open, it becomes almost Burgundian. This wine is a journey. Decanting is recommended.

Husband and wife team Christopher Bates and Isabel Bogadtke met in 2004 while working at Mosel, Germany’s historic, highly regarded Weingut Immich Batterieberg. Chris grew up in the Finger Lakes with parents who loved to ferment cider and beer. He’s worked in almost all aspects of the hospitality industry, starting as a dishwasher at 14, then as a busboy, server, and eventually as a cook; throughout his time at Cornell School of Hotel Administration, he worked as a cook at the Statler Hotel, where he had the opportunity to learn from several influential mentors. It was also at this time that he became interested in wine, and with the influence of professors, peers, (and his father, who originally handed him a copy of Wine Spectator) Chris followed his beverage obsession and made a career out of it.

Isabel also started her career in hospitality, though she was mostly focused on service. Growing up in Berlin, she worked for a Relais & Chateaux property in Germany before moving to Frankfurt where she worked at the Michelin starred Brick restaurant.

After harvest in the Mosel, Isabel and Christopher moved to Italy, where Isabel managed a tasting room at Guerrieri Rizzardi during the day and worked with Christopher in a 6 table restaurant at night. She and Christopher spent 7 years managing first The Inn at Dos Brisas, and later the Hotel Fauchere. While at the Inn at Dos Brisas, Isabel was awarded Best Service in the World by Mobil Travel Guide. Isabel is also a Certified Tea Specialist and offers interactive demonstrations on brewing techniques and proper tea service styles for restaurants and hotels.

Upon returning to the states, the couple began to think about dipping their toes into fermenting some of the cool climate fruit that grows in upstate New York; since Christopher’s family had some experience with apples, that’s where they began. In 2006, Chris and Isabel processed their first few tons of apples for cider—they fermented it spontaneously in a makeshift winery at his parent’s house. However, after a few years of production and administrative challenges, they were near ready to give up. That’s when, in 2009, Chris’ father Robert filled an empty tank with riesling as an experiment. As the grapes slowly began to ferment, it became apparent that wine was the direction to follow. After another seven years of experimenting with winemaking and exploring their local terroir, Chris and Isabel purchased their first estate vineyards.

Element’s intention is to make wine with as little intervention as possible, and to always put quality over quantity. They prohibit the use of herbicides in the vineyards and are working hard to naturally restore the biodiversity in the soils. Grapes are picked by hand and are hand-sorted. Wines are fermented slowly and spontaneously without temperature control and whites often go through malo. The grapes are basket-pressed, undergo a short settling and are racked into old, neutral puncheons where they will rest without disturbance until bottling. There are no additions and no adjustments; the wines are unfiltered and unfined.

Today, Christopher and Isabel own Element Winery, F.L.X. Table (a small restaurant focused on a communal tasting menu), F.L.X. Culture House (a nano-brewery focused on sours and barrel aged beers), and, in our opinion, a wiener joint worth building a vacation around: F.L.X. Wienery.