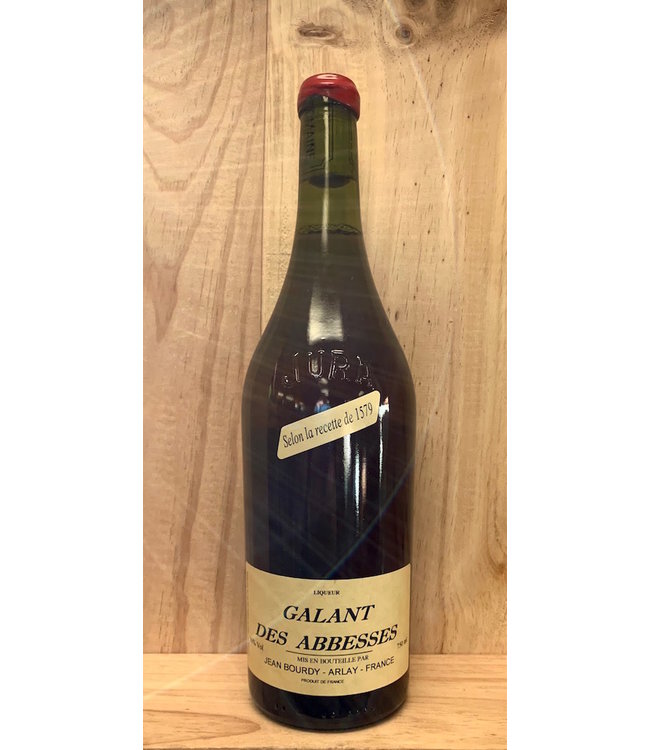 Biodynamic Chardonnay put into a copper cauldron with 25 spices heated over a wood fire, then put into barrels with 1/3 Marc de Franche-Comté (brandy) & aged for 5 years. Lush, honeyed, heady flowers just on the other side of full bloom. Delicious. Read more..

This should be $75 but maybe that $10 discount will get it on more taste buds. It's such a treat. At 16% abv, it will keep like a sherry or port. It's wildly delicious.

Our “Galant des Abbesses” is still prepared according to the old recipe handed down by the Lady Abbesses of Château-Chalon in the 16th century.

Owners of vines at Château-Chalon, they had the vines worked, and wines made, by many winemakers. They devised this recipe, which they finished by writing “it is our gallant wine”.

The original recipe says that the juice that runs from the press (the must) is put into a copper cauldron, to which are added 25 precisely weighed spices. It is then heated on a wood fire to reduce the liquid. The spices also give out their subtle aromas. It takes a whole day to cook one batch. Then the heated spiced grape juice is put into barrels with one third old Marc de Franche-Comté (brandy) or Fine. This magnificent marriage of grape juice and brandy improves over a minimum of five years maturation.

Galant des Abbesses can be served cool as an aperitif. It can be poured over melon in the place of Port.

For dessert, it goes very well with a dark chocolate cake, or one made with walnuts. In summer, sprinkle vanilla ice cream with raisins that have been soaked overnight in a little Galant, and then add a little drop to the dish. Or, still with vanilla ice cream, serve a cooked fig, still hot, covered with almond butter together with a little drop of Galant either in the dish or in a separate glass. Pears poached in Galant are a real treat.

Another way of using Galant is to deglaze the pan used to cook a filet mignon or a fillet of pork. The sauce obtained has a lovely colour, is velvety and has an extraordinary taste.

Biodynamic Chardonnay put into a copper cauldron with 25 spices heated over a wood fire, then put in..