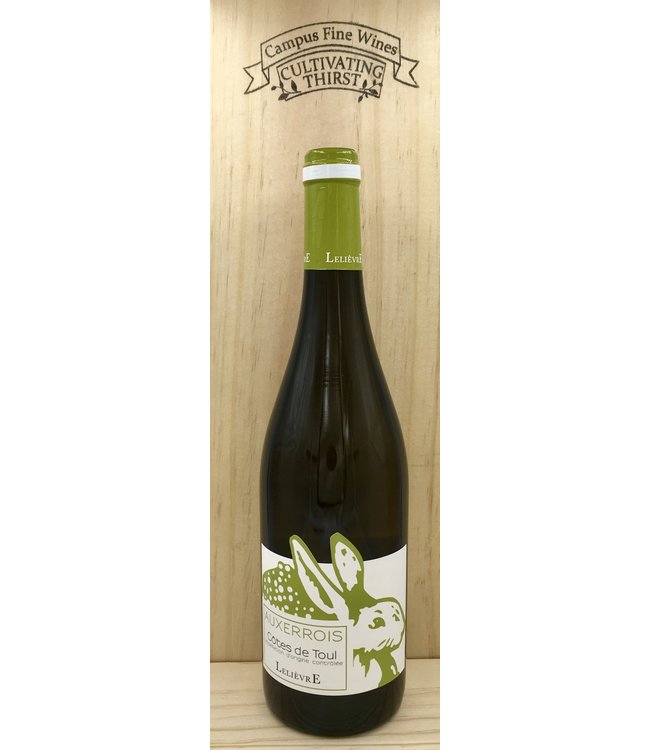 This organic white wine is from the grape Pinot Auxerrois, a highly aromatic selection of Pinot Blanc developed in Lorraine to replant the vineyards after the phylloxera crisis. The grapes are from two plots situated in Lucey and Buligny on clay and limes Read more..

Domaine Lelièvre is an organically farmed property located in Cotes de Toul, Lorraine. The Lelièvre family goes back generations here, to the time when Romans first planted vines. At one time Cotes de Toul, situated just 60 miles south of the German border, was a thriving wine-production region, covering parts of Alsace and Lorraine. It was famous for Riesling (this makes sense, as it’s located on the western banks of Moselle River–follow is north and you’re in Mosel, Germany) and as a source of base wine for Champagne. Unfortunately the region was ravaged by phylloxera, followed by rabid industrialization and poor vineyard management. Then came the First World War, German occupation, and liberation by the Allies—all of which left most of the vineyards as battle trenches. The final blow came in 1919, when a law was passed restricting the name champagne to the wines made from grapes grown in the region of Champagne. By 1951 there were only 30 hectares of vineyards left and most of the wine was bottled by negotiants. In 1998, a handful of remaining vignerons fought for and won AOC status. The Lelièvres were one of the producers to champion the region. After the 1971 vintage, Jean Lelièvre decided to no longer sell to negotiants and to bottle everything at the estate. From there the family started to rebuild, replant and recapture the glory of Lorraine. It is still an obscure little region, with most of the wine staying within the area, and very little of it leaving France.

This organic white wine is from the grape Pinot Auxerrois, a highly aromatic selection of Pinot Blan..