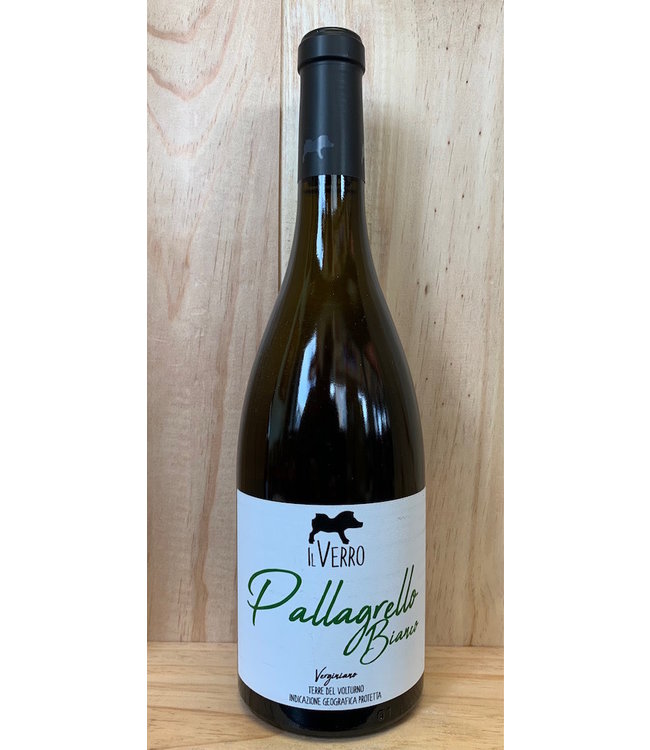 Notes from our April Wine Club:

The Il Verro Winery is located in Caserta, Campania, in southwest Italy, at the foot of the Monte Maggiore Mountain. The winery is in the northern part of the region, between the mineral-rich Riardo basin, famous for Ferrarelle mineral water (which arrives on tables after it journeys down volcanic slopes, through the earth, and back above ground through the only cold water geyser in Europe), and the Volturno valley, an area almost unknown to tourists but apparently very popular with ducks.

Since the time of the House of Bourbon (or, Borbone in this case) this area has been a hunting ground for wild boar by the barony of Formicola, a commune in the Province of Caserta. Il Verro, meaning male wild boar, is a name inspired by and paying homage to the traditions of this region.

The story of Il Verro is rooted in the friendship between five teenagers who met in the 1960s. Forty years later they came back to where they spent their childhoods, in Alto Casertano. The unspoiled landscape, verdant mountains and pristine waters brought back memories and connections that inspired Cesare Avenia to convince his friends to join him in making a little bit of wine in this haven of history and biodiversity.

Amid 14 hectares of olive, walnut, and cherry trees are 4 hectares reserved for vines — all of extremely rare grapes indigenous to this remote area and planted on lava-rich soils. “Our mission,” says Cesare, “is to enhance our viticultural heritage and make wines that follow the traditions linked to the territory.” Volcanic soils have discouraged phylloxera, and relative poverty has discouraged replanting, so the region is rich with native grapes, among them casavecchia, pallagrello nero and bianco, and the ultra-rare coda di pecora. Respect for these historic, rare varieties and an eagerness to put terroir front and center has compelled Cesare to practice organic farming and a minimalist approach in the cellar in order to let the freshness and directness of the wines speak for themselves.

Pallagrello Bianco has always been most at home in northern Campania, where the climate suits its high-acid profile and tempers its inclination to rapid sugar accumulation. It was treasured in the 18th and 19th centuries; the local ruling family was especially enamored with it and had it planted in their vineyards. Unfortunately, by the late 20th century, no one in Italy was producing a monovarietal pallagrello wine. Cesare explains that forces of powdery mildew and phylloxera “decreed a fast disappearance and substantial oblivion despite the undoubted qualities of these grapes.”

Verginiano is fermented in stainless steel with a further 6 months of stainless steel elevage, which maximizes the varietal flavors & aromatics. It’s straw-yellow, with a nose of melon, almond, bitter orange, and mint. On the palate, it’s full-bodied, and fresh, with clean ripe fruit, and a long finish.

When we asked Cesare about pairing for his wine, he had this to say:

“I’m very happy to help for this special occasion. There are many ways we recommend the pairing our Pallagrello Bianco: from salami and cheese antipasti to different kind of pasta dishes. One of my favorites is the risotto with fish [made with fennel broth and cherry tomatoes].”