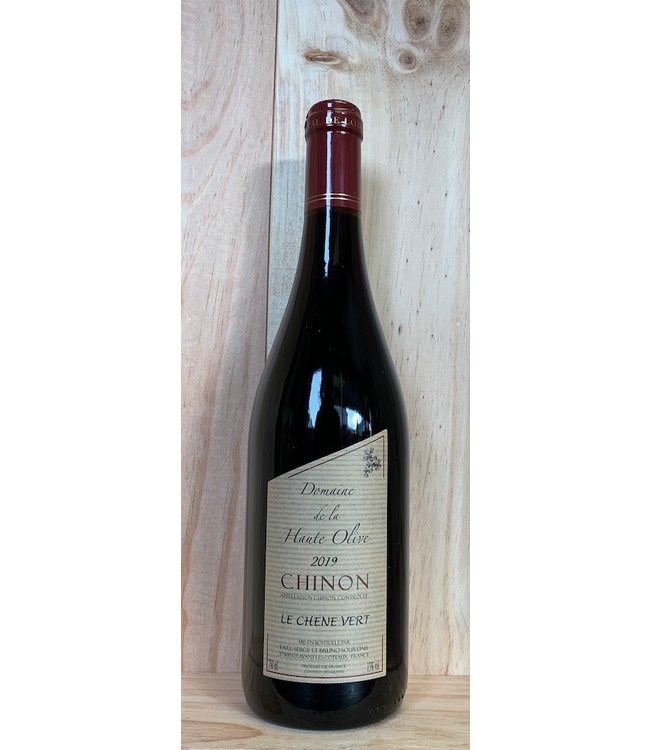 Importer notes: Le Chêne Vert is a name well known to lovers of Chinon, although few realize that Domaine Charles Joguet shares one hectare with another vigneron—Haute Olive! At 30 years of age, the vines are younger than those of Joguet and the exposure is also different, located on the south-south west hillside with an 18° slope. A light clay topsoil sits atop a limestone subsoil mixed with upper Turonian also known as millarge (yellow limestone). This Chinon is fermented in concrete and is aged for 10 months in new foudre.

Bruno Sourdais carries an intuitive understanding of his vines and cellar work that cannot be learned at any school, only transmitted from one generation to another. He and his wife, Sophie, bring this intuition to the family’s extraordinary holdings in and around Cravant les Côteaux. Their sensitivity to the varied terroirs in which their old-vine cabernet franc (the oldest planted about 1928) grows finds distinct expression in the wines. The sandy plains along the Vienne are the source for their light, quenching Les Cournuelles, while chalky silex slopes mark Les Clos with subtlety and finesse. On the hills, a single hectare of the legendary walled vineyard Le Chêne Vert, which takes its name from a magnificent oak that crowns the slope, literally stands apart. The vineyard is distinguished by its southwestern exposure, steep grade, and a rare clay limestone known as millarge; the wines by their extraordinary high-toned elegance. Through attentive viticulture and thoughtful cellar work, Bruno and Sophie seek a balance of fruit and acidity, freshness and subtlety, to achieve some of the most seductive, soulful Chinons we know.

The Sourdais family has been making wine at their original domaine, Bouchardière, in Cravant les Côteaux, since its founding around 1850. Ownership has been passed from father to son over six generations; Bruno has led the domaine since 1991. Domaine de la Haute Olive, established in 1913 and now 17 hectares, belongs to Sophie’s father, Yves Jaillais. Bruno and Sophie have leased the vines and made the wines since 2006.