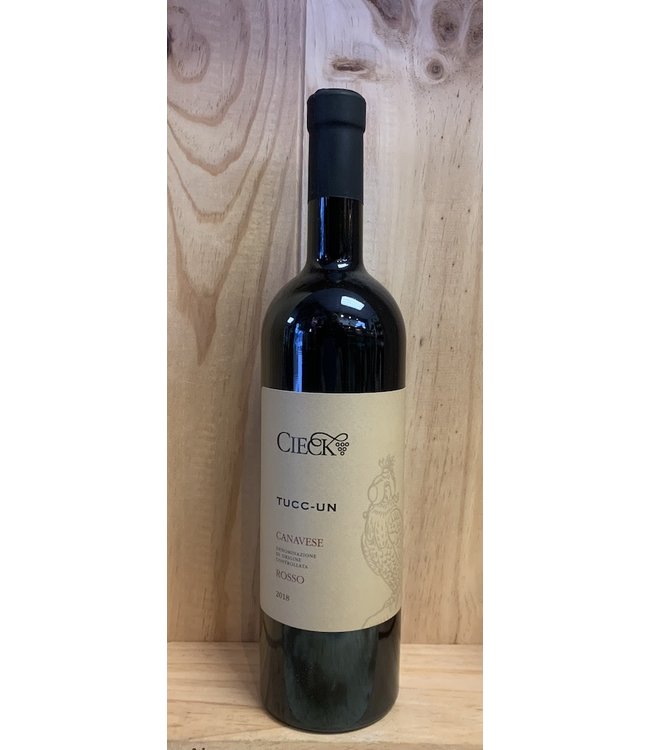 Fresh plums, figs, coffee, tobacco, orange oil, dark chocolate…on the palate it’s warm & spicy, with good acidity, and the sweetness of the wood peeks through here and there. The tannins are present, but add structure rather than chewiness or astringency. Read more..

Tucc-un means “all for one” and is the rallying cry of the independent Ivrea Alpine Brigade; it was also the motto of the Tuchinaggio, a revolutionary Canavese movement of rebellion against the feudal lords between the 14th and 15th centuries. Tucc-Un the wine is always a blend of Barbera (around two thirds), and Freisa, and often includes Nerretto, and sometimes Bonarda. All of the grapes are harvested at the same time and co-fermented in stainless steel tanks. The grapes remain in contact with the skins for seven days, with pumping over to introduce oxygen to the fermenting must. The wine completes malolactic fermentation in neutral barrique over the course of nine months, followed by another three months in bottle prior to release.

This humble red is scented with fresh plums…but the nose also evokes figs, coffee, tobacco, orange oil, dark chocolate…on the palate it’s warm and spicy, with good acidity, and the sweetness of the wood peeks through here and there. The tannins are present, but add structure rather than chewiness or astringency.

Serve with cured meats and sausages, tomato sauce pasta dishes (with or without meat), and with mature cheeses, especially goat’s cheese, and especially one from Piedmont.

Cieck is overseen by Remo Falconieri, “the Archimedes of bubbly” as christened by Carlin Petrini (founder of the Slow Food Movement). At the age of 80-plus, he’s the first to arrive in the cellar every morning, at 8 o’clock. Remo established the estate in 1985––initially, “just for fun.” The son of farmers, he was working as a typewriter designer for Olivetti when he travelled to France to learn how to make sparkling wine. The idea was to be a small producer, mostly for local consumption. With only a few hectares, he vinified his first vintage––just over 2,500 bottles of Erbaluce Metodo Classico. It was released for sale in 1987. This was the debut of the Cieck estate, named after the old farmhouse in Aglié where it all began. Since then, they have moved to the locality of Castagnola, in San Giorgio Canavese.

The winery was one of the original five producers in San Giorgio Canavese, and a number of other top estates in the area consult with Remo today. He works daily in the cellar alongside his daughter, Lia, and agronomist Domenico Caretto, producing some of Alto Piemonte’s most elegant Erbaluce.